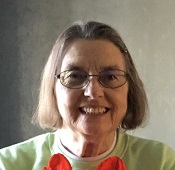 9 entries.
John C from Melbourne wrote on January 27, 2023:
Jane was a wonderful person with a caring heart. I enjoyed working with Jane very much and she will be missed by her Northrop Grumman family.
Mike Reeves from West Melbourne wrote on January 25, 2023:
I met Jane through my wife Chris Waters. They both worked at Northrop Grumman and quilted together. They were such good friends. I remember Jane had an infectious laugh. I'm sorry that she has passed; my sincere condolonces to her family.
Molly Leggett from Rockledge wrote on January 25, 2023:
Jane was such an amazing, gentle, kind and calm friend. Her special strength and cheerful outlook will forever last in our hearts. Shawn will miss his "Sunday Brunch Date" but is content to know that Jack and Jane are together again. Much Love and thanks for your friendship all these years, Jane. Prayers of comfort to her special family. Love Molly and Shawn Leggett
Eric Wiggers from Rockledge wrote on January 25, 2023:
Enjoyed frequent and friendly conversations with Jane at Northrop Grumman. Always a positive attitude, no matter the health circumstances. She will be remembered well.
Braden R. from Melbourne wrote on January 25, 2023:
Jane, I really enjoyed knowing you these last several years. Having joined the Joint STARS program in 2017 and working with you shortly after you were always my favorite software programmer to work with(shhhh don’t tell the others). You were passionate, fun, wickedly smart and sharp. You were always willing to help do our food competition judging, Judge Jane as I liked to call you, and even though you never picked me to win I was very grateful for your participation. My thoughts and prayers are with you and the family.
Pete & Joyce Grover from Melbourne wrote on January 24, 2023:
Jane will be missed but will see her in heaven. She will be remembered as a beautiful person..
Tim O'Toole from Melbourne wrote on January 24, 2023:
I'm glad we know where she is but I'm praying for Jane's family as I know they will miss her. Although I am not able to attend I'm so happy to have known Jane. She was a kind tender-hearted person.
Kevin and Colleen DeLong from Palm Bay, Fl. wrote on January 24, 2023:
We all have spent so many wonderful years together. We are so grateful to have had Jane ,Jack,and there families in our lives. God speed our friends Kevin and Colleen DeLong
Bert & Debbie Ayers from High Springs wrote on January 24, 2023:
Lynn, Such a beautiful life story about Jane. We pray for your peace and love y’all so much. Our prayers are with you and the family. Blessings, Bert & Debbie