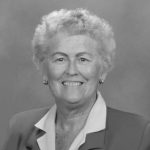 MELBOURNE, FLORIDA – Georgia Roberta (Bobby) Williams Bechtel (91), resident of Melbourne, FL since 1952, esteemed wife of 60 years to Jack Bechtel, M.D. (predeceased), beloved mother of six, grandmother of 13, great-grandmother of 18, a friend, inspiration and mentor to many, and a loved and respected community leader, died at home on October 19, 2017. A celebration of her life will be held on Sat., Jan. 13 at 11:00 am at Holy Trinity Episcopal Church. In lieu of flowers, donations in Bobby’s memory may be made to Keep Brevard Beautiful or to Holy Trinity Episcopal Church. Brownlie Maxwell Funeral Home is handling her arrangements. The family has set up a website for sharing photos and memories about her: www.forevermissed.com/bobby-bechtel
Born on June 29, 1926, Bobby was a native of Stateburg, S.C., the second youngest in a family of one boy (the oldest) and nine girls! Surviving is her sister, Lillian Gale of S.C. All of her sisters and brother were college graduates, a tribute to her parents, J. Frank and Florence Williams.
Bobby graduated from Sumter High School in 1943 and the University of South Carolina in 1946. While at USC, Bobby majored in journalism and education, edited the campus newspaper, ”The Gamecock”, was elected to Phi Beta Kappa, and finished first in her graduating class. She and Jack were married the same day they both graduated from USC. Services were conducted in the evening at Bobby’s home church, the Church of the Holy Cross at Stateburg, constructed in 1847.
Bobby taught school in Atlanta, GA for two years prior to the births of their six children in four different states. Dr. Bechtel graduated from Emory School of Medicine; interned at Bethesda Naval Hospital; served a general practice residency in Daytona, FL; practiced family medicine for two years in Eau Gallie, FL (1951-53); and then served a two-year residency at Duke University before returning to Melbourne. When they settled in Eau Gallie, the population was approximately 1,500.
While the children were young, Bobby taught Sunday School at Holy Trinity Episcopal Church for eighteen years and also worked in the church thrift store. She was the first president of the Harbor City Elementary School’s PTA and was awarded an Honorary Lifetime Membership with the Florida PTA. She also served on the YMCA Board for 10 years and helped them become a model for other YMCA’s in the state. The YMCA provided swimming, camps and clubs for the area’s youth.
As the children grew up, she became more active in the community serving as president of the Brevard County Medical Auxiliary where she welcomed many MDs and their families at her home. She also was secretary and vice-president of Holmes Regional Hospital’s Pink Ladies, working with the Candystripers and Volunteens too. She was president of St. Margaret’s Guild and the Episcopal Churchwomen and also a member of Holy Trinity’s Vestry. She was vice-president of AAUW, served on the Melbourne Housing Authority for six years, was one of the founders of the Zonta Club of Melbourne and was instrumental in the founding of Keep Brevard Beautiful.
Bobby was a member of the Melbourne City Council for eleven years where she promoted beautification, Melbourne Downtown Redevelopment, safe drinking water and was fiscally responsible, serving with integrity. She was vice-chairman of the Melbourne Airport Authority, and chairman of the county’s Metropolitan Planning Organization. Holmes Regional Hospital voted her “Humanitarian of the Year” in 1990. She also served as vice-president of the Holmes Regional Medical Center Development Council, on the board of directors of the Henegar Center, and on the advisory board for Habitat for Humanity. She received the Good Government Award by the Melbourne Jaycees in 1986.
In 1990, she was appointed to the Brevard County School Board by Governor Martinez and subsequently elected for two terms. She chaired the board for four of the nine years that she served. She diligently made herself available to all the schools and people in the county, became school board certified and presided over many contentious meetings with fairness and kindness. While serving the schools, she also was on the board for Rolling Readers for many years, on the board of the Brevard Cultural Alliance, the Children’s Services Council, and the Old Eau Gallie Downtown Redevelopment Committee. She received the Lily Award in 1990 for her community service.
The support she received from her P.E.O. sisters through the years was always cherished.
Bobby is also survived by her children: Jack (Kathy), Jim (Suzanne),Bertie Yates (Jess), Bonnie Jones (Jeff), Johnny (a.k.a. Gia or Herman), Bill (Marcia); her grandchildren: Hans Bechtel (Kate), Sonya Williams (Bo), Plato Rhyne (Margaret), Amy Reilly (Jack) Marie Ecker (Mike), David Yates (Mariana), Ruth Calderon (Jonathan), Jessica Pasha (Adam), Dylan Jones, Ori Bechtel (and his mother, Kinneret Gilad), Luke, Moriah, and Lydia Bechtel, and great-grandchildren: Sage, Kai, Carter, Harper, Austin, Plato, J.W., Anabelle, Caroline, Mikey, Mckenna, Matthew, Ana, Luke, Liliana, Caleb, Austin, and Emily.
Bobby was full of love and joy and shared that with all children, her husband, her friends, and everyone surrounding her. Her sweet spirit stayed with her to the end. She was a reader, gardener, hiker, camper, sailor, and a lover of history. She will be greatly missed! www.brownliemaxwell.com