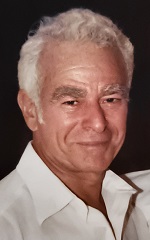 Indialantic – Dr. Julian Saxe passed away peacefully at home on January 17, 2021 after a long life of studying, learning and practicing medicine. A life lived with integrity; he was 100 years old. He was a loving husband, father and grand-father.

Born in New York City, on June 14, 1920 to Norman and Frances Saxe, he graduated from Stuyvesant High School, continuing on to Cornell University.

During WWII, he served as a dentist in the Navy, having graduated from New York University with a degree in Dentistry and Oral Surgery. As Medicine was his first love, he went to the University of Geneva, Switzerland, where he obtained his medical Degree in 1954. It was there that he met his beloved future wife, Rose-Marie. She said “Oui,” and they were married., a loving union that would last 68 years.

Back in the U.S., he did his residencies in Washington D.C. at Georgetown University Hospital and D.C . General Hospital, and in Milwaukee, where he received his Doctorate of Ophthalmology at Milwaukee County General Hospital.

In 1961, he settled in Indialantic, the first Ophthalmologist between Daytona Beach and Fort Pierce and the 23rd physician in Brevard County, Fl. He saw a lot of changes over his many years that included the construction of Holmes Regional Medical Center where he performed surgeries for 38 years. A devoted and caring physician, many of his patients remain his friends to this day.

His love of travel took him around the world. He skied, but his favorite pastime was sailing on his boat, “C’est Ci Bon.,” and in the Caribbean with his friends.

He is survived by his loving wife Rose-Marie, his son, Dr. Philippe Saxe and wife Kathy; his daughter, Alexandra Kolczynski and husband, Kevin; son, James Saxe; and his beloved grandchildren, Mickey, Danielle, and Vallerie.

In lieu of flowers, a donation to St. Jude’s Children’s Hospital, would be greatly appreciated. Due to Covid, only a private family service is planned.

3 entries.
Marie Bennett from Melbourne wrote on January 22, 2021:
Dr. Saxe was a very kind and nice person and doctor. Thanks for his time here on earth, dedicated to serving others in the medical field. May he rest in peace from Mrs. Bennett, Melbourne
Charles Woldenberg from Weston wrote on January 22, 2021:
It was my privilege to know Julian. His wit, wisdom, and avid lifelong learning sets the standard for us all. May his memory be a blessing.
claudio esposito from Indialantic wrote on January 22, 2021:
Farewell my dear friend in your travels in thru the universe. As on our small world you will be accompanied in your travels by the numerous loving and brilliant friends that preceded you and your spirit will certainly not be lonely but will enjoy your new life in a place with millions of suns and restoring darkness (as wrote so well our beloved poet).Godspeed and GOD BLESS, your friend claudio.