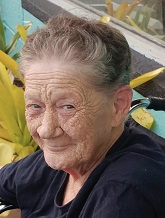 Peggy 71, left this world peacefully in her sleep at the Atlantic Shores Nursing and Rehab Center.
She was preceded in death by her parents Earl and Alice Voyles and her brother Robert Voyles. She is survived by her Sister Pearl Ann Kirkman; her children Dina Faye Garrison, Tabby Lee George, Stacey Lynn O’Rourke, and Alice Ashley Marie Garner; her grandchildren Steven George, Auston Laney, Sean Garrison, Andrew James Garrison Jr. and Jamie Garrison; her great-grandchildren Ashley Garner, Christopher Garner, Emma Garner, Kaden George, Kyler George, Kennadi George, Liam Johnson, Lane Cooley, Frankie Garrison, Darian Manresa and Zack O’Rourke and a future great-grandchild who will never get to know her “Great Grammie.”
Peggy was very crafty and loved multiple avenues of creativity which included sewing, crochet, needlepoint, cross-stitch and pretty much anything involving a glue gun. She was often on the lookout for her next project. She also had an affinity for reading mysteries. At many times in her life, she was met with many struggles and hardships that would not only define her but would also strengthen her spirit and she always tried to make the best of a bad situation. She is a one-of-a-kind lady who will be truly missed.