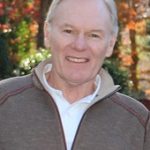 Born on July 23, 1946, Russell lived his formative years in Oradell, NJ where he met his future wife, Sandra (Pappas) Grunewald. The two lived on the same block and attended Junior High and High school together, unaware that they would be married to each for 52 rich and wonderful years.

Russ served his country proudly in the Vietnam War on the aircraft carrier USS America. After earning a BA and MBA from Indiana State University, Russ invested over 40 years in the retail industry where he became a respected executive at Macy’s and Belk. He was best known for outstanding leadership, mentoring, and results. Because of his work, Russ and Sandy planted roots in many states across the country, including North Carolina, Georgia, Texas, New York, and California… though they always considered the South, especially Georgia, to be their home.

Always an athlete, Russ enjoyed golf, vigorous exercise, and playing tennis competitively for the Atlanta Lawn and Tennis Association.
Among the many qualities he possessed, Russ was always generous with his time, thoughtful in his words, and a genuine family man. He loved nothing more than time spent with his children and grandchildren. He had a dry, wicked sense of humor, never took anything for granted, and would do absolutely anything for his family and friends. He is survived by his wife Sandy of Indialantic, FL, son Keith (Julie) of Brookhaven, GA, daughters, Kerry (Bob) Trombley of Waxhaw, NC, and Kaitlin
(Ryan) Ferguson of Woodstock, GA, his seven grandchildren, Jack, Cole, Dylan, Annalee, Dean, Ryder and Taylor, and his mother-in-law, Betty Pappas of Indialantic, FL. He was preceded in death by his parents, Louis and Anna Grunewald.

“When you are sorrowful look again in your heart, and you shall see that in truth you are weeping for that which has been your delight.”
~Khalil Gibran

No public services will take place at this time, but a celebration of life will be held next year. If so desired, in lieu of flowers, you may send donations in honor of Russ to one of the following charities:

The Joe Niekro Foundation™ is committed to supporting patients and families, research, treatment and awareness of Brain Aneurysms, AVMs and Hemorrhagic Strokes. We provide education on the risk factors, causes and treatments of these conditions, while funding the advancement of neurological research. Joe Niekro Foundation

Vietnam Veterans of America™ goals are to promote and support the full range of issues important to Vietnam veterans, to create a new identity for this generation of veterans, and to change public perception of Vietnam veterans. VVA

9 entries.
Angela Piatek from Tuxedo Park wrote on January 23, 2021:
Dear Sandy, I am saddened by the news of Russ’s passing. I remember our days together at RiverDell with fondness and how Russ reached out to my husband Walt when he was on his job search. Kindness is never forgotten. With love and prayers Angela
Don Thoresen from Las Vegas, Nevada wrote on October 10, 2020:
Sandy, so sorry to hear about your heartfelt loss. Russ was very proud of his family and handled life with a straightforwardness and dry wit that always put a smile on my face. Our time together at Hampton lakes, although short, was truly memorable - God bless Russ and your family -
Jim Lenegan from Phoenix wrote on September 8, 2020:
I enjoyed playing tennis in Hampton Lakes with him. Russ was one of the most competitive, if not the best, ALTA members on our team. Bon Voyage, Buddy!!
Diane Gruskin Thornton from FAYETTEVILLE, NC wrote on September 1, 2020:
So sorry for your loss. Russ was a great boss.
Wanda Setliff from Emerald Isle wrote on August 31, 2020:
I’m sorry to hear about Mr.Grunewald. He was a wonderful regional I enjoyed working with him during my time as store manager in Dunn. He had a great sense of humor. He will be greatly missed. Prayers to the family.
Amber House from Hope Mills, NC wrote on August 31, 2020:
I am so sad to hear about Mr. Grunewald. I had the pleasure of working for Mr. Grunewald at Belk in Fayetteville, NC. I am at a loss for words. He was a fabulous supervisor, he helped me to grow professionally and personally. Prayers of comfort for his family.
Ron von Holt from Marietta wrote on August 31, 2020:
Mary Ellen and I are so sorry to hear about Russ’ passing! Please accept our sincere condolences and prayers for your family!🙏🙏
Richard Burgner from Saint Simons Island, Ga wrote on August 31, 2020:
I was so sorry to hear of Russ' passing. We worked together for twelve years at Belk. He was a great friend and he will be missed. My thoughts and prayers go out are his family.
Treva McElhaney (formerly Singleton) from Dallas wrote on August 30, 2020:
My heart is deeply sad to hear about Mr. G’s passing. I had the pleasure of working as his Executive Assistant at Belk in Fayetteville, NC for over five years and he was the BEST boss ever! Heaven just received a fantastic man whom will be GREATLY missed! Prayers of condolences go out to his beautiful wife Sandy, his children and grandchildren whom he spoke highly of often! Rest in paradise Mr. G!