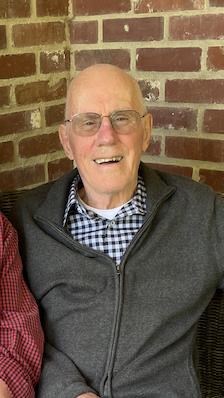 Donald (Don) Lawton Wood, age 86, passed into the arms of Jesus on Wednesday, June 2, 2021 in Orlando, FL surrounded by his family.
Born in Spartanburg, SC in 1934, Don was raised with his twin brother, Paul, by Lawton and Sophia Wood. He met his wife, Gee Gee, in the nursery at Bethel United Methodist Church, which he attended throughout his time in Spartanburg.
In 1957, Don and Gee Gee married. The couple moved to Florida, and Don received a degree in music from Stetson University. Don was then stationed in Fort Jackson, SC where he served as a trombone player in the army band for two years. In 1965, the couple moved to Melbourne, FL and Don went on to receive his master’s degree in music education from the University of Central Florida.
Throughout his time in Melbourne, Don worked as a band director at Southwest Junior High School, Hoover Junior High School, and Palm Bay High School. Don had God-given music abilities; he used these talents to leave a lasting impact on his students and worship the Lord through directing the choir at First United Methodist Church of Melbourne.
Don is survived by his daughters: Donna (Jim) Cox, Diane (Matthew) Appleby, and Denise (Craig) Brown; grandchildren: Breanna (John) Anderson, Jennifer (Brian) Lockhart, Sara (Daniel) Haire, Jacob (Megan) Appleby, Rebecca (Ernest) Sanchez, James Cox, Joshua (Leslie) Appleby, Maggie (Keith) Messer, Sophie (Noah) Chevalier; and 10 great grandchildren. He is also survived by his twin brother, Paul (Betty), and his children Scott, Stephen, Mark, Cindy, and Jennifer and their families.
Don had an easy going, pleasant, and joyful demeanor and was known for his love of family, food, and music. He left a legacy of love for God and people that is carried on by his children, grandchildren, and great grandchildren.
The family will be hosting a ‘celebration of life’ on Wednesday. June 9th at 11:00 a.m. at the First United Methodist Church of Melbourne.
“Precious in the sight of the Lord, is the death of His saints.” Psalm 115:16.
Donald (Don) Lawton Wood