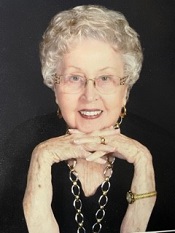 Ellen Bennett Pettengill, 89, of Indialantic, Florida went to sleep with the Lord on the early morning of Wednesday, Nov. 24, 2021 with her dedicated husband and best friend of 63 years by her side at Logan Place Senior Living Community, where they both were visiting, and sweetly shared in each other’s company into her last moments. She was born on Aug. 7, 1932, in Sewickley Township, Pennsylvania to the late James and Therese (Brennan) Bennett, formerly of Scottdale, Pennsylvania.

Ellen was parochial school educated through high school and a graduate of St. Theresa Catholic School in Coral Gables, FL, Class of 1950. Continuing on her path of strong education, she went on to earn her Bachelor of Education from the University of Miami and taught at Key Biscayne Elementary until the time she began a family of her own with her husband Dr. Howard W. Pettengill Jr., after they were set up on a blind date. Together, they built their family on a foundation of traditional values wrapped in love, were dedicated partners and the best parents you could ask for. Throughout their lives they travelled extensively through Europe together, and with their children within the United States, creating memories in our hearts for a lifetime. Being a mother and wife was the greatest role in Ellen’s life. She had a deep and passionate faith in God, which was quite fitting as later in life she became a Deacon’s wife, a role she not only cherished, but embraced. She was a very active parishioner at Immaculate Conception Catholic Church in Melbourne Beach, Florida where she hosted bible studies. Never one to shy away from her community, throughout her life she played a vital role in many social clubs and was a past president of the Brevard County Medical Wives Organization, a member of the National Panhellenic Organization, and utilized her green thumb as president of the Garden Club. She will be forever missed but deeply remembered for her tender heart and most giving spirit, that will forever live on and encompass our lives.

In addition to her parents, she was preceded in death by her grandson, Bradley; and her three brothers, John, James, and William Bennett.

Calling hours are at Brownlie-Maxwell Funeral Home, 1010 Palmetto Avenue in Melbourne on Friday, December 3rd, from 3:00 until 6:00 pm, with a Funeral Mass at Immaculate Conception Catholic Church, 3780 S. Hwy A1A in Melbourne Beach on Saturday, December 4th, at 10:30 am.