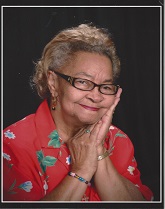 Esther Alethia Betty, 91, of Palm Bay, Florida, passed away on August 29th, 2021. She was born to parents John Howe and Rosetta Donaldson, on April 8th, 1930, in Clarendon, Jamaica, West Indies.
In Jamaica, Esther was a Housewife, Seamstress and Business woman. She became a Caregiver and Nurse’s Assistant for over 15 years, while in America. Before suffering a stroke in January 2017, she was a faithful volunteer at the Saint Vincent de Paul food pantry in Palm Bay for 6 years. She was known as “Peppermint Pattie” because Esther was always giving out peppermint candies to everyone. Her favorite hobbies included crocheting, sewing and doing word search.
Esther met Elliott Betty in 1950 in Kingston Jamaica. They were introduced to each other by Elliott’s youngest sister and Moms best friend Phoebe Betty. Together they raised 7 children.
Esther is survived by her son and daughters and their families. Adam Betty (Son), Marie Betty-Warner (Daughter), Hyacinth Williams (Daughter), Rosetta Betty (Daughter), Sandra Crosswell (Daughter), June Richards (Daughter), Monica Betty-Washington (Daughter), 21 grandchildren, and 15 great grandchildren, Lilian Bickley (Sister), and Keith Sharpe (Brother), and Alfred Sharpe (Brother).
She was preceded in death by Elliott Betty her loving Husband, for over 55 years.
The family has entrusted Brownlie & Maxwell with the arrangements. The viewing hours will be Friday September 10th, 20201 between 5pm–7pm at Brownlie & Maxwell, 1010 Palmetto Ave, Melbourne, FL 32901. A Celebration of Life Service is scheduled for Saturday September 11th at 12:30pm, at St. Joseph’s Catholic Church located at 5330 Babcock St NE, Palm Bay, FL 32905.
Rev. Father Vilaire Philius will officiate the ceremony. If you would like to make a donation in lieu of flowers please make it to Saint Vincent de Paul Food Pantry of Saint Joseph Church (321) 768-7882 or to the Crohn’s & Colitis Foundation.


3 entries.
The Stennett Family from Ft. Lauderdale, Florida 33319 wrote on September 10, 2021:
Sincere heartfelt condolences to Mrs. Betty's children, grandchildren, sister, brothers and other family members. She will be missed. However, her spirit will always be with us.
Marjorie Stennett from Lauderhill wrote on September 10, 2021:
May Esther Betty's soul rest in peace with our heavenly Father and angels. Sister Madge
Fr. M. Tracy Smith & Launa Warner-Smith from Tamarac Fl. wrote on September 9, 2021:
With sincere sympathy to the family and loved ones of Esther Betty.🙏🏾 May she rest In peace and rise in glory.✝️ Always in our hearts.💖 God’s blessings.🙏🏾 Smith and Warner families.🌹🌹