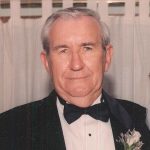 Indialantic, Florida – It is with great sadness that the family of Frederick Carl Ohnemuller (Fred) 84, announces his passing on Sunday, January 28, 2018. Fred will be lovingly remembered by his wife, Virginia McGrath (Ginni), his daughters Karin Farkas (John) and Kristin Jost (James), his stepsons Michael McGrath (Leticia) and Kevin McGrath, and his grandchildren Cecelia, Hannah, James Frederick, Matthew, Luke, and Colin.
Fred was born in Jamaica, New York, on April 8, 1933, and later graduated from Millville Memorial High (class of 1950) before enlisting in the United States Air Force in August, 1950. Fred served as a Sr. Air Policeman in Germany and the United States before being honorably discharged in July 1954. He returned to South Jersey and worked in a variety of jobs, including his parents’ bar, Freddie’s Penn Jersey Tavern, before joining the United States Postal Service. Fred retired from the Egg Harbor City Post Office where he served as Postmaster and enjoyed a long and successful career.
After retirement, the promise of sunshine and warm weather lured Fred to Florida, where he spent the remainder of his years. Fred will always be remembered for his love of his wife, Ginni, dancing, fishing, playing cards, and spending time with family and friends. He will also always be remembered for his sense of humor, quick wit, and pragmatism.
A funeral service will be at Immaculate Conception Church in Melbourne Beach on Thursday, February 15, 2018 at 10:30 AM. All are invited to stay for a reception in the church hall after the service. In lieu of flowers, donations may be made to Immaculate Conception Church or Vitas Healthcare, Melbourne, FL
Brownlie-Maxwell Funeral Home 321-723-2345 www.brownliemaxwell.com