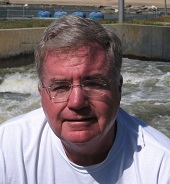 Rick was born in Hutchinson, Kansas on April 12, 1955, but grew up in Middletown, Rhode Island, where his passion for sailing began. The Newport Yacht Club became Rick’s home away from home during his teens and young adulthood – he was always sailing, teaching sailing, running the launch vessel, tending bar, or hanging out with lifelong friends. One of the highlights of Rick’s sailing career is when he competed in the J24 World Championship in Newport.

After attending college at Hall Institute in Providence, Rhode Island, Rick moved to Florida in 1981 where he began his mechanical designing career. He worked as a senior data analyst at the Naval Training Center for the Trident program until 1983, and then worked as a system support engineer for L3Harris for over 32 years, retiring in 2014.

During his career at Harris, Rick enjoyed great friendships with his coworkers, and especially liked his projects involving aviation and marine systems. His proficiency with CAD and attention to detail was well known among his coworkers, and he was pleased to help when coworkers sought assistance. His projects sometimes required lengthy travel, and his favorite assignment allowed him to spend 3 months in Alaska. Rick took every opportunity he could to explore each location, visiting museums and other cultural centers when he was not at work.

Rick joined the Melbourne Yacht Club in the 1980s, as well as the East Coast Sailing Association. In 1987 he purchased a new Hunter 28.5 sailboat he named Maverick, and was a fixture in the bi-weekly rum races, the bi-annual regattas, and lots of other sailing events sponsored by ECSA and other yacht clubs. He invited new members and anyone interested in sailing to join him on Maverick, and many of them became steady crew members for years at a time.

In 2005, one of those invitees became his wife, Suzanne Crockett. Rick coached Suzanne and her all-female crew in the yacht club’s mermaid regattas and other women’s sailing events. Out of love for Suzanne, Rick exchanged his hank-on racing sails for a roller furling jib, and Maverick became a racer/cruiser. In 2008, Rick and Suzanne took Maverick on a month-long cruise to the Abacos along with 2 other sailboats. Rick always said that a trip like that will either make or break a relationship, and for Rick and Suzanne the trip definitely made their marriage solid and unbreakable. Other trips for Suzanne and Rick included flights to Bermuda, the British Virgin Islands, Puerto Rico, Antigua and Scotland, where Rick fulfilled his lifelong wish of playing golf at the Old Course in St. Andrews. Their last trip together was a return to Newport, Rhode Island in April, where Rick was surrounded by the love and support of his lifelong friends and family.

Retirement gave Rick the opportunity to pursue his passions for sailing, surf fishing and golf. He enjoyed the company of his regular foursomes, and often played the courses at Crane Creek Reserve, Mallards Landing, and Manatee Cove. Even as his health declined, Rick simply limited his golfing to chipping and putting. He especially enjoyed golfing with his brother when he visited Rick during the winter months.

Rick’s sailing crew loved him and he loved them. He took his younger crew members under his wing and shared with them the secrets of sailing fast. He was so proud to watch them mature and develop their careers and their families, as well as their sailing prowess.

Rick is survived by his wife, Suzanne Crockett, his brother Robert (Barbara) Crockett, his sister Diane (Timothy) Flaherty, his nephews Jed Flaherty and Rob Crockett, and his niece Lisa Crockett. Rick was preceded in death by his parents, Frederick and Claire Crockett.

A social hour for friends and family will begin at 2:00 pm, followed by a memorial service at 3:00 pm on Saturday, May 22, 2021 at the Melbourne Yacht Club, 1202 East River Drive, Melbourne, Florida. In lieu of flowers, donations may be made to the American Cancer Society.

Guestbook list navigation12→
23 entries.
Carol Cole Czeczot from Black Mountain, NC wrote on June 25, 2021:
Dear Suzanne, I just found out about your beloved husband's death. I can't express how sorry I am that you didn't have more time together. I'm sure you brought him great joy in the years you did share. My heart goes out to you, and you'll be in my prayers as you navigate this wrenching loss. With Love and Heartfelt Sympathy, Carol
James, Dolores Miller from Sebastian Fl wrote on June 15, 2021:
We send our prayers to you Suzanne & family. He was a true Sailor.
Melvin & Mary Ford from Palm Bay wrote on May 23, 2021:
I was shocked and saddened when Rick told me, a few weeks ago, how sick he was. We were dock neighbors. It was a privilege to have known Rick. Rick had a fear of dogs, but became friends with my dog Rex. Mary and I want you and your family to know how sorry we are at Rick's passing. My there always be wind at his back and smooth waters at his bow.
Brent & Laurie Saunders from Melbourne wrote on May 20, 2021:
We are heartbroken by the loss of our sailing brother. He was and will always be a great friend. We look froward to racing the heavenly seas with him some day.
Jim Gibson from Melbourne wrote on May 14, 2021:
Suzanne and families, please accept my deepest sympathy for your loss. Though Rick is no longer here with us, know in your hearts that he is sailing the most beautiful waters in Heaven, pain free, and in the presence of God.
Pat Reilly from Malabar wrote on May 14, 2021:
I had the pleasure of working with Rick for 30 years at Harris on many antenna systems. Both of our favorite programs was the Ocean Net buoy that got deployed in Crete Greece. It was integrated at Harbor Branch and at the port. We always went to Grills at the port for lunch on Friday's for some Landsharks. I will always remember those days!!! He will be missed around the MYC.
Jack & Jacki Leahy from Melbourne wrote on May 14, 2021:
Suzanne, You have our deepest sympathy. You might not know that when we bought a "sister" boat to Maverick, Rick was our guru on info about it! He was so happy to think that he might have competition for the races.
Rob Van Name from Rockledge wrote on May 14, 2021:
Sorry to hear of Rick's passing. We were always happy to finish near Rick in the Rum Races. He and his crew sailed Maverick well. I spent about a decade docked next to Rick and had enjoyable conversations with him.
Peggy from Snead wrote on May 14, 2021:
MYC has a hole in her heart with Rick sailing now on distant shores, sending loving support to his wonderful family.
Tom Saam from Melboure wrote on May 14, 2021:
Deepest condolences. I met Rick at Harris back around 2005. I and really enjoyed working with him. Rick sponsored me to join the MYC, so his gift keeps on giving! Rick will be missed.
Jack Bibb from Indialantic, FL wrote on May 13, 2021:
I'll miss seeing Rick at TGIF when it resumes in full. He was one of the good guys.
Mary & Paul Johannessen from West Melbourne, FL wrote on May 13, 2021:
Our sincere condolences for your loss. We so appreciated Rick's passion and love of sailing. He touched many hearts and will be missed. Our hearts, thoughts, and prayers are with you, Suzanne, and your entire family.
Geff and Debby Hill from Avon Lake, OH wrote on May 13, 2021:
Debby and I send our sincere condolences for Suzanne and all our Novak families. Love and miss you all.
Alix Cross from Nashville wrote on May 13, 2021:
I am so sorry for your loss. Rick was always the consummate host, whether cruising us around on Maverick or grilling steaks by the pool. He will be missed.
Catherine Myers from Melbourne Florida wrote on May 12, 2021:
I worked with Rick back in the day. Attention to detail and a hardy laugh. He was one of the good guys, and will be missed.
Stuart Patterson from Madison, WI wrote on May 12, 2021:
Rick was like an older brother to me. Having known him since I was 15 he taught me so much about life, using sailing as the platform for our lessons. As we both aged, we would go for walks at work to discuss the day, on weekends we would hit the beach for some surf fishing, and, of course, we would race in the MYC rum races. So many good memories. Rick, I loved you like a brother. I know one day we will meet again. I can see you now, sailing the beautify waters in Heaven.
Kevin Smith from St Petersburg wrote on May 12, 2021:
Wendy and I wishing you and your family our deepest condolences.
Marion and Joanne Terry from Satellite Beach wrote on May 12, 2021:
Marion and I will miss Rick dearly. He was a great a friend and taught us a lot about sailing. I know he will always be with us in spirit.
Karen Crosby from Wadmalaw Island wrote on May 12, 2021:
Rick was a great brother in law. I especially loved the way her treated my sister, always with great love and respect. We will miss him dearly. Suzanne is always in our prayers.
Lyle and Jennifer snyder from Indialantic wrote on May 12, 2021:
Rick, we thank you for being an awesome friend, coworker and neighbor! We are so grateful to have had you in our life! Suzanne, you are amazing! Let us know if you need anything! Lyle and jen
Guestbook list navigation12→