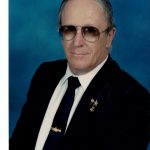 George S. Wilson, 81 years young, born, June 21, 1936, in Brooklyn, N.Y. to Elizabeth and Leigh S. Wilson, left us very sud¬denly in the wee hours of February 19, 2018.
George is survived by Sandy, his wife of 62 years; daughter, Melissa Leigh; granddaughters, Amanda Rose and Elizabeth (Bessie); sister-in-law, Nadine. He was predeceased by his parents and his brother, Robert Leigh Wilson.
At the age of 19 George served in the Army Re¬serve in a military police division. In 1960 he was employed by the Melbourne Police Department. He subsequently joined the Brevard County Sheriff’s Department and rose to the rank of Commander. He loved this service and his career in law en¬forcement extended almost sixty years. He served all the units in the Sheriff’s Department. In addition to defense tactics, he was nationally recognized as the #1 Grand Master in Aikido in multiple styles and was given the only authorization to teach this art in the United States. He spent many off hours touring Brevard County and the United States teaching and performing. He introduced many senior Aikido Sensei to Brevard County. At one point, George was the highest degree caucasion in the United States. In addition to his duties, he worked closely with the FBI, Secret Service, and foreign dignitaries including Haile Selassie of Ethiopia. He worked with Premier Cruise Lines on various security details. He and Jack Griesbaum worked on the standards of terrorism on the high seas at that time.
His retirement years were spent with his family and his greatest joy was in the accomplishments of his granddaughters. Education has always been an important factor for George, and he always stressed what he thought the girls should do in the future and how this was going to be accomplished. We feel that in lieu of flowers, he would rather have contributions made to their education fund. Donations can be made to Sandra Wilson, 1505 N. Hwy A1A #604, Indialantic, 32903.
A Celebration of life will be held Thursday, March 1st, at 2:00 pm at Brownlie-Maxwell Funeral Home in Melbourne. BrownlieMaxwell.com