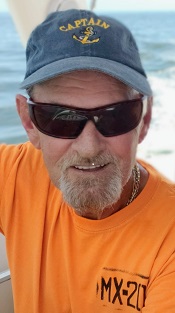 Jim Demmons died after a short illness at a Melbourne hospital on August 27, 2021. He was born on March 16, 1949, in Meriden, Connecticut, the son of Virginia Howe and Leeman Demmons.

Jim served in the U.S. Navy until he was honorably discharged, he then finished his high school degree and married his wife, Kathleen Demmons. They celebrated 48 years of marriage in February.
Jim and Kathie lived on Highland Lake for 30 years where he loved to have family and friends over for holidays and BBQ’s. He loved to boat, fish, hunt, and snowmobile with his friends.

Jim owned and operated a painting company until he retired. For the last seven years Jim and Kathie have lived in Palm Bay, Florida, with their dog Henry. Jim loved to go out on the ocean in his boat and drive his Corvette.