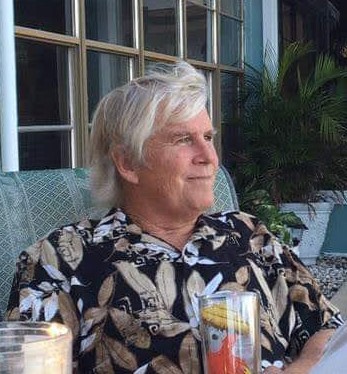 Lifelong Eau Gallie resident, Mike Spillers, passed on November 10, 2022 after a long battle with dementia. He was the son of Bill and Edith Spillers. Growing up on the Indian river, Mike was truly drawn to the water. He enjoyed fishing with his dad and brothers for the family-owned fish market, Twin Rivers Fish Company. When it came time to live with his wife Patty and raise his daughters, he was able to keep the tradition and continue making memories in the same family house on Pineapple Avenue. He would share his love for the water with friends whenever he could, racing jet skis and sailing the catamaran.

Mike was a graduate from Eau Gallie High School, the class of 1966. While in high school he enjoyed surfing at his favorite spot, 15th street in Cocoa Beach. Mike joined the United States Air Force after high school and served in the Vietnam War as a loadmaster. After serving in Vietnam, Mike returned to his home and started working at Sears where he met his wife of 44 years, Patty Flanders. She survives along with their daughters Ashley Spillers and Rani (Steven) Urbanski; sister June Paramore; brother Greg (Peggy) Spillers; sister-in-law Susie Spillers; grandchildren Nolan and Coraline.

He was preceded in death by his son Daniel and brother Sandy.

In the late 70’s, Mike became a swimming pool contractor for Florida Pool and Spa. He continued as a contractor for them up until his retirement 35 years later. He would often bring blueprints home to show off the beautiful plans he was making for families. Mike enjoyed helping families build the pool of their dreams. He made many lifelong friends while working in this industry.

Music was also a huge part of Mike’s life. He loved listening to classic country western, blues, and Southern rock. He attended thousands of concerts and owned over a thousand albums. Mike Spillers lived life to the fullest and cherished all the relationships he built along the way.

We will celebrate Mike with a military service at the Eau Gallie Cemetery on Saturday, November 26th, 2022 at 11:00 am.