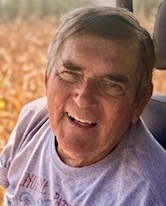 Paul Davis of Satellite Beach, Florida passed away on Sunday, June 27, 2021 at the age of 81, surrounded in love by his wife of 40 years and his children and grandchildren.

Paul was born on February 22, 1940 in Grundy, Virginia to Ethel and Elbert Davis. His younger years were spent in Paintsville, Kentucky until his family moved to Zohns Corner, Ohio in the ’50s. He graduated from Piketon High School in 1958 where he played football for Piketon High’s very first football team. In 1961 he moved to Indian Harbour Beach, Florida and attended Orlando Barber College. In 1981 he moved to nearby Satellite Beach where he lived for 40 years with the love of his life, Sally.

Paul was a local barber for many years. By the time he was 25 years old he owned and operated 3 barber shops in the area. He accumulated 10 shops over the years, but ultimately sold many and retained the 3 shops in the local area. Davis Barber Shop supported many little league and high school teams through the years. He was also very active in the Lions Club and Masons. Unfortunately he was afflicted with Multiple Sclerosis when he was in his late 30s. He had MS, but MS didn’t have him! He was the most active disabled man anyone ever met. He built furniture, fixed things around the house, helped his neighbors, and built birdhouses with kids at Surfside Elementary for Mother’s Day all while hanging off of a well-worn red scooter. It was recently said that he scooted through life with a smile on his face. He refused to give in to his disease. One of his favorite things was traveling around Satellite Beach in his golf cart before golf carts were legal. The city gifted him that privilege, which, in a way, opened the door to all the golf carts we now see roaming our beautiful city. Paul loved Satellite Beach and always felt blessed to live in such a wonderful community and amongst so many amazing neighbors.

He is preceded in death by his parents and brothers, Bob and Walter, and sister Launa Ruth. He is survived by his wife, Sally, his sons, Paul Jr. (Jane) and Andy (Tara), daughters, Veronica Davis and Kate Palmer (Nick), and 4 grandchildren. He is also survived by his sister Earlena Ann Snyder.

A celebration of life will be held on Saturday, July 10, 2021 at 5:00 pm at Brownlie-Maxwell Funeral Home in Melbourne. Please dress in casual attire, as Paul hated to dress up. In lieu of flowers please donate to the Paul Davis Park Bench Memorial fund Paul Davis Park Bench Fund or the Multiple Sclerosis Society National MS Society


3 entries.
Sue Orme from Melbourne wrote on November 14, 2021:
I just learned of Paul's passing. He gave my eldest son his first haircut. I enjoyed visiting with him when he came to pick up his children from preschool. He will be missed.
Zena MacLean from Satellite Beach wrote on July 5, 2021:
Thinking of you, Sally. My friendship with Paul goes back to the late '60's. I worked in a salon next to his barber shop. It was a fun time...a lot of teasing going back and forth between the stylists and the barbers. I enjoyed running in to him over the years. His wonderful smile always greeted his friends. My thoughts are with you and the family at this difficult time.
Bill Hall from SATELLITE BCH wrote on July 2, 2021:
my condolences Paul was a friend and fellow lions club member so sorry he had to move on godspeed