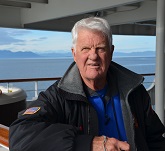 Robert (Bob to some, Rob to his mom) was born January 28, 1933 in Washington DC. He is survived by his wife of 25 years, C’Anne, his sons Roger (Bronwyn) and Philip (Renee), and his grandchildren Caleb, Joshua, and Ava.

After graduation from the Coast Guard Academy he served as an aviator in Kodiak, Alaska and Naples, Italy attaining the rank of LCDR. Following his military service he flew for Pan American Airline and United Airline for 30 years. Upon retiring as a commercial pilot he served 10 years as a volunteer firefighter for the town of Melbourne Beach, Florida. The last 6 years he split his time between Melbourne Beach and Maui, Hawaii.

Robert was an avid outdoorsman. As a blue water sailor he sailed between Florida and the Windward and Leeward Islands of the Caribbean with C’Anne retiring his sailboat in 2016 after 18 years. He golfed, played tennis, and was an accomplished skier. He learned to surf at 80.

He will be missed by his family, his friends, and the community he generously served. Interment at the United States Coast Guard Academy Columbarium is pending and a private memorial will be held at a later date in Maui. In lieu of flowers please make a donation to the U.S. Coast Guard Academy, the Melbourne Beach Volunteer Fire Department or any favorite charity.


2 entries.
Roger Gauthier from Jacksonville, FL wrote on September 7, 2021:
While I know we'll be reunited one day, today I miss the father I wanted so deeply to be close to. He was a great example in my life of what a man, husband and father should be. He was generous, kind, patient, humble and kind. I hope I can live up to his example. Looking forward to seeing him again when this life is wrapped up and done.
John Rolli from Melbourne Beach wrote on August 29, 2021:
Goodbye old chum. It was a pleasure to have served with you on the Melbourne Beach Volunteer Fire Department.