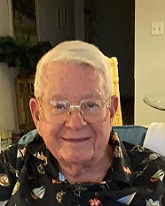 He was a resident of Melbourne since the age of 12. He graduated from Mel-Hi, class of 1950. He retired from Florida Power & Light as Customer Service Supervisor after 36 years. He was a Chaplain’s Assistant at the Brevard County Correctional Facility since 2001. He was a charter member of the Melbourne Municipal Band since 1966 where he played the baritone horn. He was an active member at Grace Baptist Church and a frequent worshipper at Heritage Baptist Church and First Baptist Melbourne.

. He was a resident in the Quail Run community where he led a weekly Bible Study.

He was a videographer and loved traveling with his family. He had a life-long love of sailing. He loved talking to others and telling them about His Savior, Jesus. He never met a stranger and will be missed by everyone who knew him.