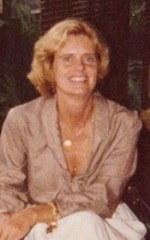 Sarah Lewis Williams, or “Sally” as she was known to her family, friends, and colleagues, passed away peacefully on July 24, 2020 at the age of 86 in Melbourne, Florida. She was born in Carbondale, Illinois to Dr. John Shelby Lewis and Elizabeth Harris and was the eldest of six children.
Sally was a lifelong learner and teacher, both in her family and in her career. She graduated from Stephens College in Missouri, then received Bachelor and Master degrees from Southern Illinois University (SIU). Sally had a passion for reading and said the favorite part of her career was teaching children to read. She had a long teaching career in Belleville, Illinois and her last position there was principal of Emge School.
After retirement she relocated to Carbondale, where she again took up teaching, this time as an instructor at SIU teaching student teachers. At the same time, she was involved in various learning and community activities such as French table, investment club, book clubs, PEO, and Stephen Ministry, and reconnecting with high school friends.
Sally raised four resourceful, resilient, loving children in Belleville along with her late husband, Bob, who passed away in 1994. The children grew up learning a sense of duty, commitment, compassion, and strong work ethic. Sally made sure they had enrichment activities such as music lessons, Boy Scouts, Girl Scouts, horseback riding, bowling lessons, roller skating, and camps in addition to solid academic educations.
These four children brought Sally the great joy of her life—her nine grandchildren and one great-grandchild. Grammy Sally, as she was known, always made time to participate in and enrich their lives whether hosting sleepovers at her home, attending school events, making Advent calendars, providing unique Christmas ornaments, or just being there to make each feel they were incredibly special.
In addition to family and career, Sally made time to travel and did so extensively in the United States and Europe with family, friends, and on her own. She traveled annually for decades with her mother and four sisters creating a tradition known as “sister week”. Because she was so well read, she was a fascinating storyteller about the history and people of the places visited.
Sally will be deeply missed by her children–Amy Elliott, Sara Brown, John (Julie) Williams, and Michael (Jody) Williams, her grandchildren—Tyler (Kristina) Stull, Andrew Elliott, Mariah, Jared, and Ethan (Kaitlyn) Brown, Craig (Erica) and Timothy (Meghan) Williams, Melissa (Jarid) Roan, and Benjamin Williams. Great-granddaughter, Emma Rush Williams, was born only days before Sally’s passing. Sally’s surviving sisters, Beth (Bill) Kamm, Kate Wharton (Al Kohnle), and Mary (Neely) Kountze, keenly feel her loss. She was predeceased in the last year by her sister, Winston Lewis, and her brother, John Lewis. A small family service will be held at a later date.