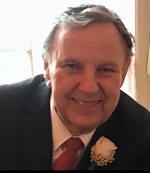 Thomas F Maguire, 82 passed away peacefully on May 12, 2021 with his family by his side. Thomas was born in Brooklyn, New York to the late Arthur Lee Maguire and Doris Carolyn (McCarthy) Maguire. Tom was raised in Dorchester, MA.

Tom leaves behind the love of his life of 62 years, Mary Patricia Maguire. He was a loving and devoted father to 3 daughters: Patricia Leigh and late husband William of Yreka, CA , Dianne Maguire of Sarasota, FL and Janice Fallon of Milton, MA. He was a beloved grandfather to Frank Brennick Jr., Kristina Marsano and her husband Jordan, Kathryn Brennick, Caroline Brennick, Edward Fallon and his wife Kate, Lauren Fallon and Matthew Fallon. A great grandfather to Everett Marsano and Edward Fallon IV.

Tom was predeceased by his brother, Arthur and his sister, Kathleen Lilijegren.
Tom is survived by his younger brother, John and his wife, Gail Maguire of NH. He leaves behind his beloved sisters-in-law, brothers-in-law, nieces, nephews, and friends.

Tom was a proud Navy Lieutenant serving in the Navy for 23 years. He began his career in 1956 qualifying and receiving his dolphins on his first submarine, the SSK244 Cavala. His entire career was on submarines. They were diesel, Fast Attack, Fleet Ballistic Missile (FBM) nuclear subs and retiring on the Sea Wolf submarine in 1979. He was stationed at many bases on the Eastern seaboard from; New London, CT, Norfolk VA, new construction in Hampton, VA, Pascagoula, MS and finished his career on the West Coast at Mare Island Naval Shipyard, Vallejo, CA. After serving his country, he and his wife moved to Melbourne Beach, FL.

Tom was an avid sportsman. He enjoyed football, baseball, racquetball, hunting and fishing . He was known as the “The Sturgeon King” in the San Francisco Bay area.
Living in Florida he became very active in the game of golf.

The family is grateful for the exceptional care provided by Dr. David Shapiro, and the many doctors and nurses at Holmes Regional Hospital and the Melbourne Kidney Center.

In lieu of flowers, donations can be made to St. Jude’s Children’s Hospital.

Services will be scheduled at a later date.

He will be interred at Arlington National Cemetery, Washington, D.C.

4 entries.
Robert LaDuke from Freeland wrote on June 5, 2021:
So sorry for your loss. I served with Tom on Seawolf as another Mustang in the Special Projects Department, good memories of Tomwjo had a huge heart. I'm sure he will be missed.
Linda and Steve Niblett from Homosassa wrote on June 5, 2021:
We want to extend our heartfelt sympathy to your entire family.
Marjorie Hanawalt from Crozet, VA 22932 wrote on June 4, 2021:
Dearest Pat, My heart and prayers reach out to you at the news of Tom’s death. How wonderful to learn that you were married 62 years! John and I bought our condo unit right under Marylin in 2000. She introduced us to you and Tom and our friendship began right then! Tom was such a wonderful friend to Dick Jeffreys, especially during the time of Dick’s illness. I admired his faithfulness to his friend and loving support you gave to Marylin and the boys. Once again, I thank you for your loving kindness to me and John which I will never forget. I do wonder if the dear Lord has a very special place set aside for all our dear friends from Aquarina to meet and remember the great times had together? May God bless you and your dear family with the peace and joy of knowing Tom is welcomed into paradise! With deepest sympathy and much love to you and your dear family, Marjorie The Lodge at Old Trail 330 Claremont Lane, Crozet, VA 22932. Apt.212
Leslie Pumfrey from St Louis wrote on June 4, 2021:
Uncle Tom,, I so enjoyed growing up with your humor and smile. I hope you are at peace. My prayers are with you Aunt Pat, Patti, Diane, and Janice!