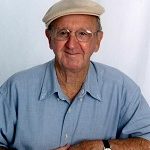 Thomas Stankos, 91 of Melbourne passed away December 9, 2020. He was born and raised in Morgantown, WV and moved to Melbourne in 1961. He worked for Chrysler Missile Division at the Cape where he was Man of the Year in 1968. He later opened his own cabinet Shop and later became a Maintenance Manager for Trailer Haven for 16 years. He was a member of Ascension Catholic Church and volunteered for Meals on Wheels for 29 years.
He is survived by his wife of 70 years Kay, daughters Melinda (Robert) Walter and Tammi (Dan) Gast, 5 grandchildren and 8 great-grandchildren, three brothers and one sister. He was predeceased by a daughter Kathy Robbins and great-granddaughter Ella Gast.
A Funeral Mass will be celebrated on Monday December 14th at 11am at the Ascension Catholic Church.
Donations may be made to the charity of your choice in his memory.