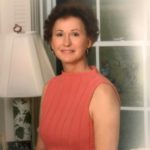 Diane Cecelia Chappie Sewell, 82, died November 25th 2019 in Melbourne, Florida. Diane was born during the Great Depression on a family farm in Dellona Township, Wisconsin to parents Alexander and Cecelia Barna. Diane was raised a Roman Catholic and maintained a deep sense of belief throughout her life. Diane grew up with three older brothers and one younger brother: Kenneth (Jim), Alexander (Alex), William (Bill), and Ernest (Ernie). Growing up on the family farm, Diane and her brothers learned the necessity and value of hard work from an early age. Diane did well in school, she graduated from St. Mary’s Academy High School and the Milwaukee County Hospital School of Nursing. She absolutely loved being a registered nurse and was always very proud of her chosen profession. Ms. Sewell followed her parents to Florida and worked for years as an operating room nurse at Holmes Regional Medical Center in Melbourne. After retirement, Diane traveled throughout North America with her husband Jim Sewell. Following the passing of Dr. Sewell, Diane rededicated herself to family and volunteered at local schools and churches. Diane eventually met Charles Farrell and they shared happy years together and many trips in the US and Europe. Diane is survived by her four children: Holly Dwyer of Palm Bay, FL; Scott Chappie of Melbourne, FL; Gary Chappie of Leonardtown, MD; Nancy Ryan of Melbourne, FL; seven grandchildren; and four great grandchildren. Diane was predeceased by her beloved husband Dr. James A Sewell, fiancé Charles Farrell, and grandson Gary Chappie Jr.
Diane Sewell, loving wife, companion, and mother touched many lives during her 82 years on this earth, leaving it a better place. She will be remembered lovingly by her family and friends for her strength, beauty, kindness, and determination. A celebration of her life will be held at Brownlie-Maxwell Funeral Home at 2 PM on Saturday December 7th. In lieu of flowers, donations may be made to Habitat for Humanity.