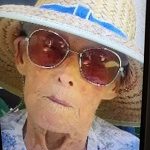 DOROTHY DAVIS BELL, 98, passed away at her home on January 30, 2020. She was born in Birmingham, Alabama on January 15, 1922.
Graduated from University of Miami in 1944 with a Bachelor’s Degree in Education. Received her Master’s Degree from Columbia University in 1950. Dorothy was chosen for ‘Who’s Who Among Students in American Universities and Colleges’. She taught schools in Dade County including Coral Gables, Miami Shores and Little River.
In 1951 she married Myrnice Loos Bell Jr. and operated Bell School in North Miami and Camp Bell Ridge in Gainesville, Florida.
Active in many organizations including Kappa Kappa Gamma Alumnae Associates.
Survived by sons Gregory (Debra), Fred and Kent; grandchildren Griffin, Kendyl and Tyler, 5 nieces and 1 sister.
Private service will be held at a later date. Leave condolences at Brownliemaxwell.com


2 entries.
Angie& George from Bonney lake Washington wrote on February 11, 2020:
Miss Dot was a sweet woman..she had so much personality and loved her family very much..i am thankful to have gotten to know her and spend time with her...she is often thought of and greatly missed
Andy Judd from Oviedo wrote on February 11, 2020:
Condolences to all! I think both her and my mother were both members of the Kappa Kappa Gamma sorority. Regardless of how members of Greek campus life may be regarded now, these women provided their families with a moral and ethical compass that has made us who we are. RIP, women like this are rare and we are fortunate to have them in our lives!!