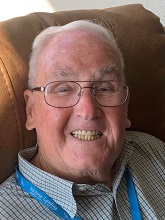 GEORGE JOHNSTON, Melbourne Beach, FL, 86
Passed away Thursday, April 21st, 2022. Mr. Johnston was born in Kearny, New Jersey. He came to Brevard County in 1992 from New Jersey. He happily retired from UPS with over 30 years of service. George was a member of Immaculate Conception Catholic Church in Melbourne Beach, he enjoyed traveling and was passionate about the New York Giants. Mr. Johnston was preceded in death by his wife Yvonne, survived by his daughters Theresa (Roger) Charbonneau of Columbus, OH and Lisa (Larry) Herman of Altamont, TN. Grandchildren, Analyse, Tyler, Savannah, and Jensen; preceded in death by brothers Frank, Jim, and sister Betty.

Visitation will be from 10 to 11am, Tuesday, April 26th at Immaculate Conception Catholic Church with the funeral mass immediately to follow at 11:30am.

Anyone planning expressions of sympathy is asked to consider donations to the Alzheimer’s Association.