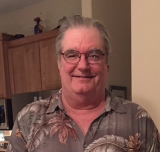 James (Jim) C. Wagg, 63, passed way June 18th at Seaside Nursing Home and Rehab Center in Daytona Beach, Fl. He was born in Melbourne, Fl to Harold and Alene Wagg. He graduated from Melbourne High School in 1973 where he played on the high school baseball team and was instrumental in taking them to the Florida State High School Championship which they won. Jim went on to join The United States Air Force where he served in Germany and Colorado for 6 years. While in Germany he played baseball for the Armed Services baseball team and pitched the winning game for the Armed Forces European Championship. Jim was an avid golfer and a die-hard Miami Dolphins fan his entire life. Jim’s professional career was in Information Technology (IT) where he worked the Help Desk at Harris Corporation for several years. He was preceded in death by his parents Harold and Alene and best buddy John King. Jim leaves behind a brother Terry (Jean) Wagg, Edgewater, Fl, sister Pamela McFarland, New Smyrna Beach, Fl, niece Cristina DeFeo, New Smyrna Beach, Fl, and nephew Nick Wagg, Portland, Oregon, and numerous friends and acquaintances. Calling hours will be Saturday, June 23 at Brownlie Maxwell Funeral Home in Melbourne from 1:30 to 2:30 with the service immediately following.
It is with a heavy heart that we mourn the loss of our brother, our uncle and dear friend

2 entries.
John D. Kennedy from Deland wrote on October 26, 2021:
I [played with ol lefty back on that 1973 Mel High team. I was just talking about him and Darrell Hammond's last night when we saw Darrell's net flex show. Bruce and all the guys were a great group. I was the back up catcher and caught Jim many times. He will be missed. Gator!!
Wayne Tyson from Palm Bay wrote on May 24, 2021:
I was just watching a game and a lefty pitcher reminded me of Jim. I Googled Jim's name, and found out he had passed away. We played together at BCC in 1975. I remember him as a good guy, and a tough guy to hit against. May he rest in peace.