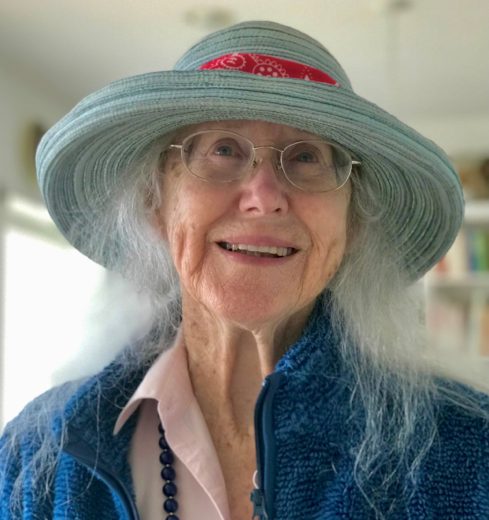 Joan Carol Patterson (Pinaglia), beloved wife, mother, and grandmother, passed away peacefully at home with family by her side in Melbourne Beach, Florida on November 28, 2021. She was 83 years old. Joan was born on May 10, 1938, in West Haven, Connecticut to Orlando and Ruth Pinaglia. Joan grew up in Lake Park, Florida and was a graduate of Palm Beach High School. She received her Bachelor of Arts degree from Florida International University.

While employed by Pratt & Whitney Aircraft in West Palm Beach, Florida, Joan met George Patterson in 1958. They were married in 1960 and had been married for 61 loving years at the time of her death. After living in Virginia outside of Washington, D.C. and Cocoa Beach, Florida, they settled in Miami, Florida in 1968 where they raised their daughter Leslie and lived for nearly 25 years before retiring to Melbourne Beach, Florida in 1993.

Joan’s passions were family, playwriting, music, travel, and sports car driving and rallying. Joan wrote many one-act and three-act plays which were produced in Miami, throughout South and Central Florida, and off-Broadway in New York City. Joan excelled in playing classical and ragtime music on her beloved grand piano. It was a common occurrence to hear Chopin, Mozart, and Scott Joplin played daily at home or at gatherings for friends and family.

Joan had a wonderful sense of adventure and traveling through Europe and the United States were the highlights of her summers visiting Italy and France most frequently. She loved meeting young people with different cultural backgrounds, sharing her heritage, and gaining insight into their lives.

Joan loved to have fun, and one of her favorites past times was driving her sports car and competing with George in numerous SCCA rallies in Florida and Virginia in the 1960s and 70s. Her superb driving skills were often talked about by competing drivers at the post rally gatherings.

With an infectious laugh and wonderful sense of humor, Joan was extremely kind and compassionate. Above all activities, she enjoyed spending time with her family and her two granddaughters, Chloe and Katie. She was “Naunie” to them, and they will both tell you that her constant sense of optimism and cheerfulness will stay with them for the rest of their lives. It is hard to write anything good enough to describe Joan. Her love of life and kindness made an indelible mark on her family and those closest to her. Memories of Joan will be loved and treasured, and she will be dearly missed.

Joan is preceded in death by her parents, Orlando and Ruth Pinaglia, her sister Marie Edwards, and her brothers Orlando and Raymond. She is survived by her husband of 61 years, George Patterson, her daughter Leslie O’Brien and husband Ian of Marietta, Georgia, her sister Alice Acquavita and husband Fred of Lantana, Florida, and her two granddaughters, Chloe O’Brien and Katie O’Brien.

A private family gathering was held to honor her cherished life.