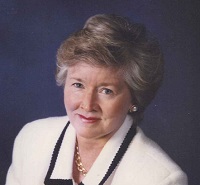 Lynn was born in Washington DC on September 13, 1944 and spent her childhood in Washington where she attended Sidwell Friends School. Lynn attended Guilford College in Greensboro, North Carolina. At Guilford she met her future husband Hugh Normile. They were married on campus at the Friends Meeting Room on August 14, 1965 and soon left for Gainesville Florida where Hugh entered law school.

After moving to Melbourne Florida Lynn completed her bachelors degree in psychology at Rollins College where she graduated with honors.

Lynn was the daughter of Herman Cyrus Morris and Myra Joselyn Morris. She is survived by her husband Hubert C. Normile Jr. and her two children, Krista Nicole Soboh and Hubert Wendell Normile; and four grandchildren, Layla Soboh, Farris Soboh, Omar Soboh and Eliza Normile. She is also survived by her sister Susan Morris McGee of Charleston, South Carolina. Further she was survived by her son-in-law Majed Soboh who had a special fondness and affection for her.

Lynn is well known in our community and Florida for her passionate advocacy against second hand smoke in restaurants and public places. She was a member of the Governmental Affairs committee of the Florida Lung Association and a former President of the Space Coast Lung Association.
In 1985 she recruited State Representative Marilyn Evans Jones to cosponsor the first Florida Clean Indoor Air act which was enacted by the Florida legislature in 1985 to protect people from the health hazards of secondhand smoke. She continued her advocacy and in November 2002 71% of Florida citizens voted for a constitutional amendment to prohibit smoking in all enclosed indoor work places.
Lynn had an important role for Floridians to finally being able to go into smokeless restaurants. She went on to advocate no smoking in airlines.

Lynn was an early counselor at the South Brevard Women’s Center and was a founder of Keep Brevard Beautiful. She was also a lifetime member of Planned Parenthood. She was a founding member of the Women’s Dialogue of the Highlands Institute in Highlands, North Carolina.

When Lynn was a child in Washington DC her mother would take her to Arlington National Cemetery to place flowers on the gravesite of her great great grandmother, Sarah Elizabeth Thompson. She
became curious as to why her grandmother was buried at Arlington and spent many years studying and doing research and made several trips to Greenville, Tennessee where she interviewed local historians and visited the library that had a wealth of information on Sarah, as did Duke University.

Lynn learned that her great great grandmother was a Union spy during the Civil War and when Sarah Elizabeth Thompson learned that her husband had likely been shot and killed by one of John Hunt Morgan’s soldiers, Sarah sought revenge. Later John Hunt Morgan was camping out in Greeneville, Tennessee. Sarah rode 20 miles on horseback to Bulls Gap and told the Union soldiers “Give me 10 of your best soldiers and I will give you Morgan“ The Union soldiers rode with Sarah back to Greenville and discovered Morgan hiding in a vineyard where they shot and killed him.

In the late 1880s Sarah was awarded a pension by Act of Congress and was recognized by Congress for her role in Morgan’s death. Sarah Thompson died in 1903 and was buried with full military honors in Arlington National Cemetery.

A memorial service will be held on May 28, 2002 at 10 AM At Eastminster Presbyterian Church, followed by a reception at the Eau Gallie Yacht Club.

In Lieu of flowers the family request that donations be made to the Florida Lung Association.•

1 entry.
Garey D Hartman from Melbourne wrote on May 8, 2022:
Hugh; Dixie and I extend our condolences during this time. Lynn was a very special Lady. Our prayers are with you.