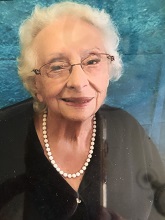 Margaret F. Houlihan, loving wife for 54 years to Charlie Houlihan and devoted mother to Billy, John, and David Houlihan, passed away peacefully on Tuesday November 1, 2022. Margaret recently turned 95 years old and had spent many years traveling between her family home in Massena, NY and her Florida home in Clermont, Florida. During the past few years, she lived in Brevard County, FL.
Margaret was the mother of three sons, William Houlihan and his wife Mary Gerbig of Madison WI, David Houlihan of Massena, NY who preceded her in death in 1978, and John Houlihan Sr. and his wife Laura Dolan Houlihan of Melbourne FL. She was also preceded in death by her parents Mary and Michael Francia, her brother Mike Francia and his wife Blanche, her sister Mary Duarte and her husband Leon, her sister Helen Shulkin and her husband Elie, her brother John Francia and his wife Olga, her brother Frank Francia and his wife Don as well as her nephew Tony Francia.
Margaret was the proud Grandmother of David Houlihan and his wife Laura Beyer, Ashley Houlihan and her husband EJ Cox, and John Houlihan Jr. along with Simi Kandola, Dr. Jamie Thompson and her husband, Dr. Ryan Thompson, Matthew Gerbig and his wife, Colleen Kehoe, Joel Gerbig, and Madeline Gerbig. She was also delighted to be the Great Grandmother of Liam Cole Houlihan, Samantha Thompson, and Benjamin Thompson.
In addition, Margaret is survived by Mike and Linda Shulkin, Marlene and Jerry O’Neill and their children, Barbara Francia and Cherie Tyo, Frank and LuAnn Francia and their children, Mark and Mary Lou Francia and their children, and Diane Francia Major, her husband Tony and their family.
Margaret’s parents moved to America before World War I when her oldest brother, Mike, was just a baby. Margaret was the youngest of six children and was inseparable from her mother. They were not wealthy. Her father went blind and had to retire on disability. At one point, Margaret’s mother cooked for workers who were building the St Lawrence Seaway for extra money for the household.
Margaret was a graduate of Massena Central High School. She began her career at Alcoa where she met her husband Charlie. They married in 1949, and moved into their house on Washington St. Margaret took pride in the life she and Charlie built together as well as in her roles as a loving wife and mother. When her sons were young, she sold Avon for several years while building one of the largest base of customers seen in her area. It wasn’t all smooth sailing though. For example, she once lost her Avon order book. Despite the initial dismay from so much work potentially going to waste and her customers’ disappointments, she proceeded to fill over 100 orders from memory. She was not the kind of person to turn away from a challenge. Later, for many years, she worked as Office Manager for Massena Optics. After she and Charlie retired, they spent summers in Massena and winters in Clermont FL.
Margaret and Charlie also made it a priority to keep in touch with their families, hosting holiday dinner parties and cookouts in the summer.
Margaret’s hobbies included sewing, knitting, gardening, and baking cookies. Margaret was famous for her beautiful garden and especially for her delicious cookies. Each family member had their favorite of which she always kept an ample supply.
Margaret along with her husband Charlie were very active parishioners and ministry volunteers at St. Mary’s Catholic Church in Massena. Margaret served as chairperson for the annual St. Mary’s church bazaar and was a member of the Parish Council.
Margaret was president of the Cherry Knoll home owners association in Clermont for several years. Her amazing cookies helped to make her one of the most beloved of home owner association presidents, and those cookies ensured full attendance at the HOA meetings.
We would like to thank the people at Glenbrooke, and her caregiver Sharon Williams, Market St, Vitas Hospice and Senior Helpers who provided care for Margaret during these last few years.
Margaret was a kind, loving and generous person who will be missed by many, especially her family.
A service will be held at Brownlie-Maxwell Funeral Home, 1010 E. Palmetto Ave., Melbourne, FL 32901 on Friday 11/11/2022, from 5:00 to 8:00 PM.
A wake is planned at Phillips Funeral Home, 64 Andrews St, Massena NY, followed by a Funeral Mass at St Mary’s Catholic Church, 105 Cornell Ave, Massena NY and burial in Calvary Cemetery, Maple St, Massena NY.