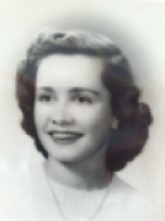 Melbourne – Surrounded by her 5 children, Mary Louise Didden went to be with the Lord on January 8, 2022. Mary Lou was born October 6, 1932 in Newport, New Hampshire.

Her early years were spent in Harrisville, New Hampshire until her family moved to Gardiner, Maine where she attended high school. Mary Lou married the love of her life, William Didden on August 12th 1950. They raised 5 children while residing in Pennsylvania until 1985 when they moved to Flagler Beach, Florida. After the death of her husband in 2006, Mary Lou lived in Port St. Lucie with daughter Dawna and her family. She moved to The Fountains in Melbourne near son, Bill and wife Babs, in 2014. She will be greatly missed by her 5 children, 11 grandchildren, and 2 great-grandchildren. Mary Lou will rest beside her husband of 55 years.

1 entry.
Val Alfano from Indian Harbour Beach wrote on January 16, 2022:
Bill and Babs I'm so sorry for your loss!! She was a lovely person the few times I met her in church! Beautiful smile and you were always both giving of yourselves for her care and company!! Love you both.