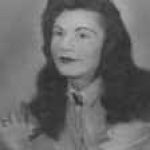 Terry Voldness went to be with the Lord on Friday, March 2, 2018, at the age of 90, after a brief illness. She was preceded in death by her beloved husband of 60 years, Idris “Red” Voldness; son Michael; daughter-in-law Renee; and brother Terrence J. Ferguson.
Terry and her husband moved to Brevard County in the 1990’s from Granville, Ohio.
Terry was a loving Mother, Grandmother, Great-grandmother, and dear friend to many, and will be missed by all who were blessed to know her.
Memories will be cherished by her surviving five children, Thomas, John (Brenda), Jerome (Ann), Donna, and Peter; fourteen Grandchildren, and sixteen Great grandchildren. Terry is further survived by seven of her nine siblings.
Terry had a keen sense of humor and enjoyed reading, baking, swimming, bike riding, and arts and crafts, and in fact, continued bike riding and swimming until two weeks before her passing. She was an active volunteer at the Immaculate Conception Catholic Church in Melbourne Beach, Florida.
Calling hours will be Friday March 9th at 5pm followed by a service at 6pm in the Brownlie – Maxwell Funeral Chapel.
Expressions of sympathy maybe made in her name to Hospice of Heath First.