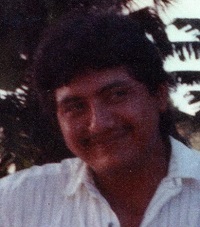 Saturday May 2nd 2020 Nicolas Anthony Tafoya, 53, went to rest with the Lord.
Nicolas was survived by his parents Nicolas (deceased) and Lily Tafoya; children Matthew (Elise) Tafoya, and Amanda (Kevin) Krukoski; grandchildren Lucy Tafoya, Easton, and Audrey Krukoski; Siblings Diana Tafoya, Debra Lonergan, Denise Tafoya, and Monica (Jerry) Cowart; many aunts, uncles, nieces, and nephews (Paul and Jennifer Miller deceased).
Tony (Nick) was born August 7th 1966 in Colorado and was raised in Indian Harbour Beach Florida. He graduated from Satellite Highschool and grew up skateboarding and surfing. As an adult he was a talented lifelong auto mechanic and was known as Nick the Mechanic. He had many trials in life but always had a smile on his face and managed to poke a joke as often as possible. He will always be remembered for his laugh and ability to make people laugh.