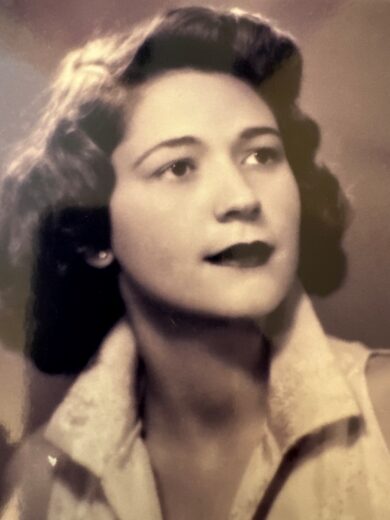 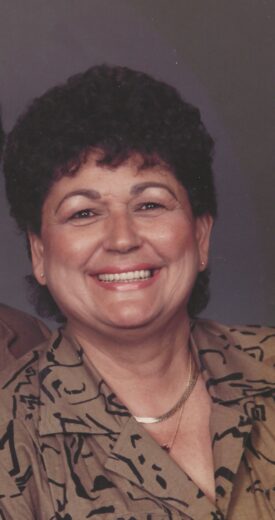 Nora was born in Cienfuegos, Cuba and came to the United States with her family when she was 5 years old. She lived in New York City. There she met and married her husband Nick in 1954.
They started their family there and in 1963 moved out to Denville, New Jersey – ‘to get away from the city’. Tired of the winters in general, they moved to Melbourne in 1967 where Nick started working for Radiation. They built a home in Melbourne Beach in 1968 and lived there until earlier this year.

Nora volunteered at the schools her children attended, went to all the sporting events- she had to make sure the umpires and refs were doing their jobs properly! And would let them know if they made a mistake.

She volunteered at Brevard Hospital/Holmes Regional as a Pink Lady for over 40 years.

She was a member of St. Katherine’s Greek Orthodox Church, always helping with the Philoptochos and working at every festival event.

She loved to dance and was usually one of the first up on the floor, especially if it was a good cha-cha or mambo.

She and Nick traveled extensively, visiting Greece, Italy, France, Austria, Great Britain, Israel, Australia as well as many sites across the U.S. She loved this country and was so very proud of being an American citizen. She wore her ‘red, white and blue’ proudly.

Nora enjoyed painting and her art is something her family and friends will always treasure.

She was a daughter, sister, wife, mother but her most cherished role was that of grandmother and great-grandmother. She loved being Yia-Yia. She enjoyed attending their school and sporting events, carrying on the tradition.

Her smile was as big as her heart and her presence will be truly missed.

Calling hours are Friday, December 9, from 5 until 7pm at Brownlie Maxwell Funeral Home in Melbourne. Her funeral service will be held on Thursday, December 15 at 11am at St. Katherine Greek Orthodox Church with burial to follow at Cape Canaveral National Cemetery in Mims, Florida.

1 entry.
Anthony Thompson from Richmond wrote on December 10, 2022:
I first met Mrs. Yanas when she and Mr. Yanas visited John while we were Freshmen, and later roommates, at UCF. From the very beginning , Mrs. Yanas included me as if I were one of her own. One of many qualities, in addition to her cooking, laughter, sense of humor, warmth, and spirituality, was her complete and utter devotion to others whom she considered family, and most of all, to her family. Anyone who met her, were graced by her attentiveness and beautiful smile. Those who know her are blessed by her sweet and abounding spirit sweet spirit. I send my prayers of peace and comfort to Mr.Yanas, Diana, John and Stephanie, and, Nick and Kelly, grandchildren and great-grandchildren. Blessings to all. TIDINGS In the midst of doubt and uncertainty, when fear might overwhelm and shroud our senses, and, winds of despair are the forecast; we are reminded that our promise and our salvation have already been secured and wrapped in heaven's embrace as beauty and light and hope and favor, the day our Christ was born. — Anthony C. Thompson