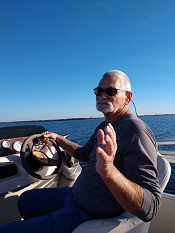 Phil Shuler formally of Iowa and Indiana passed away March 21, 2021 at Holmes Regional Medical Center in Melbourne, Fl.
Phil was born in Terre Haute, Indiana and attended school in Plainfield, Indiana.
At the age of 17 Phil became interested in sprint car racing becoming a mechanic for his friend. After several years Phil continued in the racing industry building, mechanic, and crew chief. His history of racing is impeccable which included Indianapolis 500 teams, USAC racing teams (Silver Crown, Sprint, Midgets, Street rods, drag, and salt flat cars). The salt flat 1932 flathead roadster holds the world record.
Phil’s achievements are many to which he didn’t talk much about. To him he loved what he did and did what he loved until his retirement in 2020 from Jewell Group, Davenport, Iowa. Upon his retirement he relocated with his wife of several yrs. to Kenansville, Fl. to live out his life fishing and relaxing.
Phil leaves behind his wife Vickie (Hall), daughters Cassandra (Matt Stearns), Stacy Segura, and son Chad Puterbaugh (Becky).
7 grandchildren, 4 great grandchildren, brother Denzel Shuler (Debbie), sisters Pam McKibben, and Cathy Milhorn (Mike). Several neices and nephews.
He was proceeded in death by his parents, Kenneth and Betty (Carpenter), and a brother Steve.
There will be a memorial held at a later date this summer.


6 entries.
Ron Speth from Avon In wrote on March 31, 2021:
Phil lived just around the corner from me in Plainfield. Was a quiet guy but friendly.
Jack and Beth Davis from Kenansville, FL wrote on March 31, 2021:
So very sorry to hear of Phil’s passing. He was a man of few words, heart of gold, super nice guy who loved his great grandchildren. He will be forever missed.
Dennis and Joyce Schaible from Kenansville FL wrote on March 29, 2021:
Always a smile on his face especially when riding in the gulf cart with grandchildren!
Michelle Barnett from Lakeland wrote on March 29, 2021:
I am blessed to have Phil and Vickie in my family. I love you both with all my heart. Phil is deeply missed.
The Jewell Family from Iowa wrote on March 29, 2021:
He will be dearly missed. He was such a big part of our lives for so many years. He was a good man with a big heart as well as a wealth of talent and knowledge. We couldn't have asked for a more dedicated friend and team member.
Mark & Kim Sikorski from Davenport, Iowa wrote on March 29, 2021:
It was a pleasure to work with such a talented and great man and an honor to be a friend of his. Gods speed my friend!! You will be so missed.