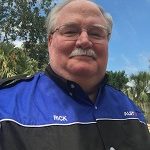 Richard Lee “Rick” Lawson went to be with his Lord and Savior Jesus Christ on September 3, 2020, at the age of sixty. He received Christ as his personal Savior on October 16, 1988.

Richard was born in Oklahoma City, Oklahoma on April 16, 1960, to Fred Russell Lawson and Mary Frances Lawson. As the youngest of three boys and the child of two life-long educators, Rick learned the value of never ceasing to pursue knowledge and wisdom.

Rick graduated co-valedictorian from Alva High School in 1978 and attended Northwestern and Oklahoma State University where he received his Bachelors of Science in Electrical Engineering in 1983. Rick spent his career at General Dynamics and Lockheed Martin in Fort Worth, Texas, from 1983-1999, Harmon Industries and General Electric Global Signaling in Grain Valley, Missouri, from 1999-2009, G.E. and Alstom in Melbourne, Florida, from 2009-2020.

While a Senior in high school, Rick met his best friend and love of his life, Vickie Sue Fender, whom he married on August 2, 1980, at First Baptist Church of Alva, Oklahoma. Rick, as a devout Christian, was an active member and deacon of Central Baptist Church, in Melbourne, Florida. He faithfully served not only his family, church members, local citizens, but also many other people throughout the nation, as he willingly shared his salvation testimony, as part of Life Action Ministries, from 1988 till his death.

Rick was a steadfast family man, guiding his wife Vickie and eight children through the call to Christian home education and pursuing God’s individual call on their lives. He quietly upheld the convictions of stewardship, godliness, integrity, and humility. Rick was an active constituent, holding his local, state, and federal representatives accountable to the moral standards he desired for his country. He was a simple man, enjoying quiet time with family playing games, guitar, singing and above all guiding his children in pursuit of God.


1 entry.
Brad chegwidden from alva ok wrote on September 11, 2020:
Rick was always a good and faithful servant. Our prayers are with you Vickie and your family. RIP Rick