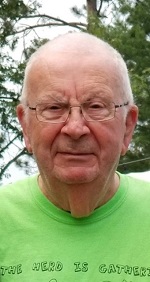 He was proceeded in death by his parents, Clifford and Catherine Current, his brothers, Clifford Current and James Current, and his sisters-in-law, Margaret McGregor and Betty Current.

He served in the US Army during the Korean War, attaining the rank of sergeant.

He loved driving in the car-at 90 years old he was still making the trip from Florida to Michigan. He won his first cruise as a prize at work for his sales and from that he fell in love with cruises. He was optimistic and outgoing. He enjoyed playing pool. He was curious about many things. He was an avid learner with a special interest in history, politics, geography and genealogy – his memory for details was excellent his entire life. He and Mary enjoyed designing and building houses. He could figure out how to fix most things and built some beautiful wooden furniture for their home.

He worked at many jobs, beginning work as a young teen. Worked as a draftsman and later earned his Professional Engineer’s license. His career was in technical sales, designing and selling pipes, valves and fittings for large scale manufacturing facilities. When he was 62, he retired from WKM, where he was national salesman of the year in 1985.

His immediate family will have a memorial in August 2021 in Mio, Michigan, where the annual family canoe trip with its various iterations has been held since 1964. Arrangements by Brownlie-Maxwell funeral home in Melbourne, Florida.


3 entries.
Nalini Patel from Melbourne fl wrote on February 17, 2021:
RIH Mr Bob. My condolences n prayers to the family. He n my mom had some fun times. Thank you for that. 🙏🙏
Linda Jones his Current wife from Malabar wrote on February 15, 2021:
Love is forever. Our souls allow Love to grow even when the heart is broken. You are the "Bestest".
Jerry Current from Pasadena wrote on February 9, 2021:
Miss you dad. We calibrated your life this past weekend and toasted in your honor. You will be remembered fondly for your humor, patience, intelligence and fondness for good food and good friends. Love you!