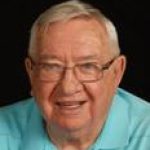 Russell Werner Couch, 85, passed away at home on Thursday, March 22, 2018. Russ was born in New Brighton, Pennsylvania, where he was a life member of The American Legion. A former banker, he was also an active community volunteer and a US Navy Veteran of Korea. Russ is survived by his wife, Betty Jo (Spickerman) Couch, and children: Michelle (Michael) Lonsway of Palm Bay; Catherine Couch and Russell (Shelby) Couch of Beaver Falls, PA; sister, Nancy (Frank) Vukich; brother-in-law Richard Clark; and several nieces and nephews. He was preceded in death by his parents Arthur and Virginia Gray Couch and sister Joan Clark. A Memorial Service will be held at Advent Lutheran Church, Suntree on Saturday, March 31, at 10:00 a.m. Interment will be at Cape Canaveral National Cemetery on Monday, April 2, at 1:30 p.m. If desired, memorial contributions may be made to Advent Lutheran Concert Series or Hospice of Health First.