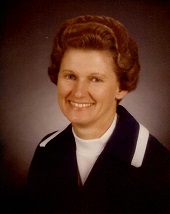 Shirley H. Lewis passed away in Melbourne on July 19, 2021 at the age of 93. She was born in Malabar, Florida and lived for many years in Melbourne. Shirley worked in the family store, Huggins Hardware, in downtown Melbourne where Hell’n Blazes Brewing Company is now located. She graduated from Melbourne High School in 1945 and was the Valedictorian of her class, and attended the Florida State College for Women, now FSU, where she was a member of the Delta Zeta Sorority. Shirley married Ben E. Smith in 1949 and was active in many civic organizations and activities, among them were the Tempo Club and the March of Dimes. Shirley served on the Melbourne Hospital Board of Governors during the time the new hospital (now Holmes Regional Medical Center) was being planned and built.

Shirley and Ben purchased acreage and horses shortly after their children Sandy and Todd came along. The family soon became charter members of the Trail Riders Club in West Melbourne and began participating in western horse shows across Florida. Many trophies and ribbons were won in both halter and performance classes.

Shirley supported Melbourne High School baseball for many years and provided the annual Most Valuable Player Trophy. Many baseball team parties were held at the Smith home on the river and at the Trade Winds Club and Hotel in Indialantic. She always sat in the same seat in the bleachers at home games and if someone else happened to take that spot before she arrived, others would tell the person they had to move because that was Shirley’s spot.

In 1970, Shirley married cattleman Azel G. Lewis and lived at the Duda Ranch (now the town of Viera) in Cocoa where Azel was in charge of the artificial insemination and pregnancy testing of the ranch’s beef cattle. Azel, who was originally from New Mexico, managed the Beef Research Unit at the University of Florida in Gainesville for a time and was a pioneer in developing the artificial insemination and pregnancy testing techniques that are the foundation of today’s technology in that field.

Shirley and Azel moved to Union, WV in 1974 and began their own cattle operation which they operated for over 40 years. While there, Shirley supported Azel as he served as the president of the Monroe County Cattlemen’s Association, the president of the West Virginia Cattlemen’s Association and as he was appointed by the Commissioner of the U.S Department of Agriculture to a position on the first Cattlemen’s Beef Promotion and Research Board of the National Cattlemen’s Association. During these years, Shirley hosted many guests from the cattle industry and was very active in all phases of their ranch operation, from record keeping to working in the cow pens sorting and doctoring the cattle. Shirley and Azel also raised registered quarter horses and she was hands on with the new colts that arrived each year and was responsible for their horses being so gentle.

While in Union, Shirley and Azel made many close friends. They attended the Gap Mills United Methodist Church until health issues prevented their attendance. When Azel’s health forced him into a nursing home, Shirley made the daily drive for a number of years to the Springfield Nursing Home in Lindside, WV to keep Azel company and help care for him. After Azel’s death in 2016, Shirley continued to live in Union until 2019 when she moved back to Melbourne where she remained until her passing.

Shirley was predeceased by her daughter Sandra Lynn Smith Phillips who was killed in an automobile accident while on her honeymoon, her husband Azel G. Lewis, her brothers Harvey B. Huggins, Jr. and James Huggins. Shirley is survived by her son Todd Smith and his wife Cheryl, her granddaughters Kaley Baker (Tim), Hannah From (Matt), and Shelby Hearns (Tremayne), and 5 great grandchildren Malik and Malcolm Hearns, Major and Tripper From, and Naomi Baker. She is also survived by her cousin Deanne Huggins Ray (Steve).

No services are planned at this time due to concerns of the Covid-19 virus. A private graveside service will be held at a later date.


7 entries.
Pamela Huggins Wisniski wrote on August 25, 2021:
Dear Todd, Cheryl & family, I am so sorry to hear about Aunt Shirley. Her and I have stayed in touch through letters over the past several years. I will always remember the good times we had as kids at the Duda Ranch where she & Uncle Azel lived. When they moved to W. Virginia my kids would visit them during summer vacation. I will miss her deeply. My condolences to all of you on your loss. Love, Pam
Angela Stephens from West Melbourne wrote on August 6, 2021:
Dear Todd, Cheryl, and family, I will always cherish the memories that I have of spending several summers with Aunt Shirley and Uncle Azel in West Virginia when I was a teenager. We really enjoyed watching the 1976 Summer Olympics together! Uncle Azel made sure that I was fluent at gate opening and Aunt Shirley taught me a skill that I have since had a LOT of practice at, how to fold laundry. Both, great skills to have! lol They both hold a very special place in my heart! Love and Light, Angela, Mike, and family
Lad and Glenda Platt D’Angelo from Coral Springs, FL wrote on August 6, 2021:
Todd, Cheryl and family, Sandra first let us know about Shirley’s passing. We send deepest sympathy from us and my sisters and family. We have fond memories of your mom. Glenda (Platt) & Lad D’Angelo
Pat Huggins from Melbourne wrote on August 5, 2021:
Todd and Cheryl, I am so sorry she is gone. I have such wonderful memories of Shirley from feeling special as a child receiving a birthday card from her "in the mail" to visiting with her in West Virginia. She was a very special person. Deepest sympathy.
Beth Glover from Melbourne wrote on August 2, 2021:
Todd and Cheryl, I was so sorry to read about your mom's passing. Another chapter of life in Melbourne has closed. I fondly remember her beautiful smile.
Marilyn Holmes Kitchel from Melbourne wrote on July 30, 2021:
I have many wonderful memories of Shirley. She was always so positive and had such a love of life. God rest her now. My deepest sympathies to her family.
Sandra Platt Lovett from Melbourne wrote on July 28, 2021:
Heartfelt condolences to all of you. She will be truly missed. If there is anything I can do, please call. Always, Sandra