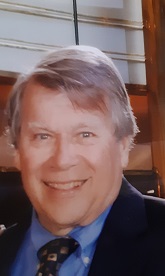 Thomas Ross Moor (June 20,1940-January 24,2022) was a 1958 Graduate of Ottawa Hills High School Toledo Ohio. He attended University of MI and graduated at the University of Toledo with a degree in finance. His career was entirely focused in the field of corporate taxes and he spent the last 20 years of his career as Director of State and Local Taxes for Harris Corporation in Melbourne Florida. Tom served as President of the Florida Chapter of Tax Executives Institute and Chairman of the Florida State Chamber Commerce Tax Committee. Tom was a member of the Sons of the American Revolution (Brevard County Florida Chapter) and a member of American MENSA.

Tom loved offshore fishing and then turned to sail racing his J-24 named “Watercolors” on the Indian River. He became a member of the East Coast Sailing Association where he served as river race chairman at the Melbourne Yacht Club.

Tom met his future wife Jackie, graduate of Toledo Central Catholic High School, at a family wedding in San Francisco in 2001. Tom and Jackie loved to travel, which they did extensively for the next 15 years. After retirement, Tom bought a cabin on the northern shore of Lake Huron near Cedarville MI where he refurbished a 1957 Chris Craft which he named “Oh Jackie.” Tom and Jackie enjoyed cruising amongst the Les Cheneaux Islands and were often visited by family and friends. Jackie turned to her passion and became an accomplished water-color artist serving on the board of the Les Cheneaux Arts Council. Tom and Jackie have enjoyed their retirement in Indian Harbor Beach Florida and continued cruising around on a Grady-White on the Indian River.