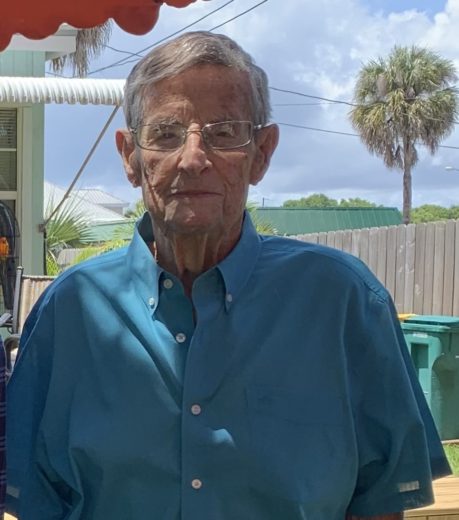 William (Bill) Brashear would have been 90 years old just 6 days before he inherited his new body on August 12, 2022. He is now rejoicing in Heaven
Bill was a member of Suntree United Methodist Church. He worked on Sundays in the parking ministry. At church cookouts he could be found at the grill cooking hot dogs. He was baptized by Reverend Burdette of the 1st Baptist Church of Indialantic.
He is survived by: his wife of 72 ½ years, Patricia, children, Catherine (Bob) Hernandez, Louis Brashear, and Rebecca (Jerry) Negri, grandchildren, Jeff (Briana) Halverson, Bobby Halverson, Kathryn (Bill) Barrett, Bryan (Alysa) Brashear, Chelsea (Jerry) Mahurin, Shane (Noelle) Brashear, Richard Lee Hartzel and Keith (Kristin) Farlow, 17 great grandchildren and two dogs, Astro and Taz.
Bill was a member of the Arkansas Air National Guard. He was called to active duty during the Korean Conflict. He came from Little Rock, Arkansas in 1956 to work for RCA in the space program. He traveled all over the world to prepare tracking stations for the missiles launched from Cape Canaveral. RCA was ultimately purchased by GE then CSR. He retired in August 1992 from CSR. He also opened and operated WEB Tower Company in 1971.
In the early years he enjoyed building race cars with his friend, Don Carlson, and racing at the Eau Gallie Speedway where he was known to have the best looking car on the track. He also enjoyed working in his yard and sitting in the sun. After retirement he spent many days with the grandchildren at the beach, going to Sea World, Disney World, and camping at Fort Wilderness. Bill and Pat purchased a motor home and loved traveling around Florida.
Bill’s life and work ethic was the golden rule (Matthew 7:12.) He was a loyal friend, always willing to help anyone who was in need.
He loved Florida and considered it home. He really was the man, the myth and the legend to his children and grandchildren.
A memorial service will be held at the Brownlie – Maxwell Funeral Home on Saturday August 20th at 12 noon.