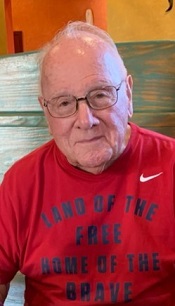 William (Bill) Stearly was born in Pottstown Pennsylvania, where he spent the years of his youth and teen years. After high school, he felt the sense of duty to serve his country and joined the US Navy and served for 20 years as an Electronic Technician, reaching the rank of Master Chief Petty Officer (E9). In 1973 Bill retired, completing an honorable and successful career serving his country. In 1956, Bill married the love of his life, Lois Weis, a pretty farm girl from Clear Lake, Minnesota. Their love continued throughout their 66 years of marriage. Throughout their 66 years together William and Lois saw lots of country and lived in 25 homes in their first 25 years of marriage (lots of military moves).

After military retirement, Bill and the family moved to Anoka Minnesota, where he was inaugural in starting the first Navy Junior Reserve Officer Training Corps (NJROTC) program in the state of Minnesota at Blaine Senior High School. In 1980 Bill decided he had endured enough Minnesota winters and relocated Lois and himself to Palm Bay Florida, which they have called home for the past 43 years. After a few years in Florida, Bill decided he was not ready to be retired and started another 20 year career working with Callagy Tire providing customer service and making a lot of connections with the community.

Bill was a very active member in every community he was part of, including Palm Bay. He was very involved with Saint Joseph’s Catholic Church as a lector, the Knights of Columbus (4th Degree Knight) where he served as Grand Knight, and District Deputy.

Family was very important to Bill, which included being part of his four kids’ life and activities as they grew up including scouts, Little League and other community organizations. Bill had a passion for traveling and seeing the country he loved, which probably became part of his DNA after spending 20 years in the Navy. Bill shared this passion with his family and was always planning a family trip or adventure and was the family cruise director, cruising was a favorite adventure of his. He loved sailing the oceans of the world.

Bill was more than a husband, dad, grandpa, father-in-law, uncle and friend. He was an iconic figure, a leader and mentor, and a hero to all who had the pleasure and honor to have him as a part of their life. Bill was a very loved and respected man by all who knew him, and he will be missed by all.


5 entries.
Laura Collins from Guilford, CT wrote on January 19, 2023:
Dear Lois and family. Your friends up here in the Northeast are so very sorry for your loss. Bill was a true gentleman and taken too soon. You are all in our thoughts and prayers.
Krystal Lawson from Shoreview MN wrote on January 14, 2023:
Stearly Family, I'm so sorry to hear about Bill's passing from this earth. Your family has had some amazing leadership being raised by Bill and Lois. With William Stearly at the helm, success was inevitable. What a Good, Funny, Gracious man. He will be missed.
Jennifer Janutolo from Sebastian, FL wrote on January 14, 2023:
Lois and family: So sorry to hear of Bill's passing. I have many years of fond memories of him through St Joe's, many community functions and fundraisers, VFW & K of C activities, senior center, st Vincent food pantry, bridge, cruises , many mutual friends , holiday parties, and get togethers with my parents - Marietta and Gene. Both of you were so supportive of my mother after the loss of my Dad in 2016. My prayers are with all of you. Jennifer Janutolo Taylor (Brian)
Cathie Stearly Barcia from Palm Bay wrote on January 13, 2023:
Saying goodbye to your hero is one of the hardest things you'll ever do!! Love you so much! Forever your Little Girl!!
Mike Stearly from Bemidji wrote on January 13, 2023:
Love you Dad!