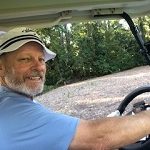 Terry F. Bishop, 64, of West Melbourne, FL passed away on Tuesday March 17, 2020 at his home. He was a native of Ft. Worth, TX and a retired NCO in the US Navy. After the Navy he worked for Northrop Grumman in Melbourne. He was an avid golfer and Dallas Cowboy fan.
Survivors include his wife, Vicki sons Tim (Lucy), Jimmy and Terry F. Bishop, Jr. also a daughter, Virginia Martinez (Jamie), and many grandchildren, as well as a sister, Jamie George.
Services are pending.