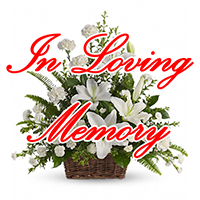 William B. McQuarrie passed away peacefully surrounded by his family, at his home in West Melbourne on July 27th. He was of Christian faith.

Bill was born on October 30th, 1940 to his late parents Hilton and Lucille McQuarrie in Baton Rouge, Louisiana.

After moving to St. Petersburg, Florida, Bill graduated with a double bachelor’s degree in Business from Florida Southern University and began a career with the Florida Power Corporation that lasted 33 years until he retired at the age of 55.

After his retirement, Bill enjoyed many hobbies, which included meticulously organizing his shop, working in his yard, and doing all of his own home improvements. He enjoyed watching the Tampa Bay Buccaneers, and hosting Friday night dinners with his family and friends.

Bill will be greatly missed and thought of fondly by all who knew and loved him. A celebration of his life will be announced at a later date.


2 entries.
Tony Padilla from Tampa wrote on March 3, 2021:
Worked and was a friend of Bill for many years. An amazing individual. I often see many of his friends, he is missed.
Jim Murphy from Dunnellon wrote on December 10, 2020:
I worked with Bill at Florida Power. He was a great guy and a good friend.