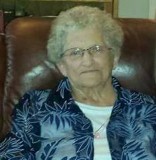 Leona Cecelia Orlowski, 91, passed peacefully on Friday, April 27, 2018 at Holmes Regional Hospital in Melbourne, Florida. She was born in New Castle, Pennsylvania on July 4, 1926 to the late John and Mary Korab Iwanejko. She was married to her beloved Frank John Orlowski for 46 years before his passing on March 27, 1996. Leona was a homemaker and enjoyed cooking and baking. Before moving to Florida, she was well known in New Castle for her cookies and cakes, especially wedding cakes. She enjoyed time spent with her loving family to whom she dedicated her life.

A service celebrating her life will be held on Saturday, May 5, at 10:00 a.m., Brownlie-Maxwell Funeral Home, 1010 Palmetto Ave, Melbourne, Florida. Interment will be with her beloved husband, Frank, at Florida National Cemetery, Bushnell, Florida.